Home
Fantasy
Prisoner of the Elements by Zian Schafer (ePUB) 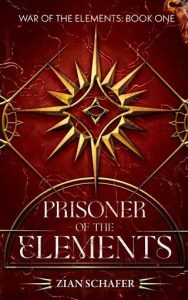 They said it would be a great war to end all wars. To create peace between the Elemental Empires: Fire, Water and Earth. As one war ended, another started. The gods came back with a vengeance because peace was never meant to be an option.
Now, the lands of Zephryine are cracking, the ocean is a living plague, and crops have become nothing more than skeletons.
To Althea Viteri, the destruction of the realm is the only way to set her family free from the clutches of Audor, the Empire of Fire. Her family has nowhere to run. Not with the bands marking their wrists as the chattel of the Empire.
But she harbors a secret written on her skin — a power that she’s successfully hidden for twenty-three years, until one day it unleashes itself, catching the eye of King Cyrus.
Taken prisoner in the palace and with the constant threat that the people she loves will be slaughtered, her only option is to escape.
Yet the longer she’s a prisoner the more she realizes there may be more to her untamed power than she initially thought. Something that makes her a danger not only to herself, but to the world.