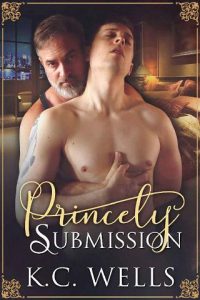 Who says love has to be gentle?

A spoiled prince on his first overseas tour is torn between resenting his hot bodyguard—and yearning for him.
Prince Jordan is twenty years old, rich, and finally seeing the world. The last thing he needs is a babysitter. Especially one as rigid as Stuart Whitmore, an older, muscular man who makes it clear from their first meeting that there will be consequences if Jordan misbehaves.
No one has ever laid a hand on Jordan his whole life, but for the first time he’s contemplating the possibility—and trying to figure out which buttons to push to achieve his goal. Because there’s something behind Stuart’s eyes that tells him he feels the same magnetic pull that Jordan does.
Stuart doesn’t give a damn that Jordan is a prince—he’s still the most entitled brat he’s ever laid eyes on. He’s also a temptation, igniting desires Stuart had thought long since extinguished. The prince needs a firm hand and Stuart is just the man to provide it, but there’s a vulnerability to Jordan that calls to him.
A call that proves too difficult to ignore.
What happens when discipline crosses the line into intense heat?
And what are the ramifications when the connection becomes so much more than just physical…
For both of them?