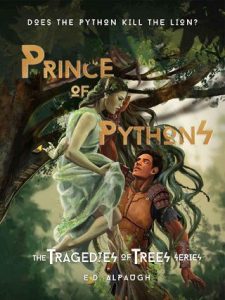 A king’s curse constrains my desires. But he cannot tame my heart…

It began with my beloved sister, Ida, fleeing the clutches of the Python King. As if struck by a golden arrow of Eros, the king chased us into the Forgotten Forest and almost captured her before Gaia, the Earth Herself, saved us both.
But in the chaos of that day, I was separated from Ida, and the king cast a wicked curse. A spell that subjected me to a life of celibacy, leaving me with an insatiable hunger for that which I was denied…
Months went by with no sign of my sister, and I began to lose hope. Until the day he showed up.
His name was Amphissus. He was sent by his king to find Ida, although it wasn’t clear why. And there was more to the mysterious mortal man than met the eye.
While the curse may have restricted my body, it had no control over my heart. I was free to follow the whims of passion. Free to kill any man who threatened my sister or me.
Or at least, as free as a cursed nymph could be…