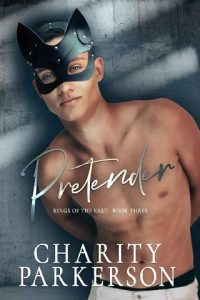 Alessandro wouldn’t say meeting Ender was love at first sight. It was definitely love by second glance, though. Too bad Ender is a liar.
While Alessandro is currently serving his second mafia boss, he plans to stop here. Back when he had been a bodyguard for Xiv’s father, Vlad, Alessandro had hated everything about this life, but people don’t quit crime lords. They wait until their bosses are dead or kill them themselves. Xiv is a different kind of crime boss, though. He’s a good man. Alessandro will do anything to keep Xiv in power. But Alessandro never expected Ender.
Ender is only loyal to one entity above himself: the Kapra. While the west coast mafia has no intentions of taking over the east, Xiv has caused problems for Ender’s boss in the past. That’s the only reason Ender is staying in the same town as Alessandro and ending up in the same places. He needs to keep an eye on Alessandro’s employer. At least, that’s what Ender keeps telling himself. That doesn’t explain the longing in his gut or why he keeps making excuses to stay.
When a young assassin meets a seasoned killer, sparks fly. But it’s only a matter of time before everything explodes around them. It’s possible no one will be left standing at the end.