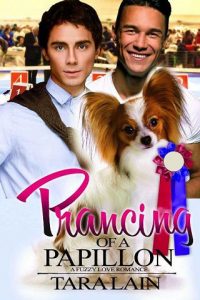 Opposites attracting, billionaires getting kidnapped, a Papillon who’s smarter than you are, and near-death at a dog show….

Jericho Jones is giving up on social life. What social life? Six-foot-five and packed with muscles he barely earned, Jericho looks like an alpha top, when he’s actually a gentle bottom who teaches first grade and lives with his hypochondriac mother. When Jericho’s friends, Finn and Em, suggest he accompany Finn to a dog show as the handler for their Papillon, Batshit, he decides, while he might be the world’s least likely Papillon prancer, he’d be grateful for a new experience and a few days away from Mama.

Jericho’s prepared to take dog handling seriously, but he’s not prepared for the pure lust he feels for wealthy dog owner, Brees Apollonia, a guy totally out of Jericho’s league. But Brees’s family issues make Jericho’s look tame – his father wants to marry him to the daughter of a prospective business partner. When Brees starts being followed by unknown guys, he thinks his father’s trying to scare him and uses it as an excuse to be “protected” by big, hunky Jericho. But pretend gets way out of control, and suddenly the only thing between Brees and possible death is a smart dog with big ears, three intrepid women, and gentle wimp, Jericho Jones.