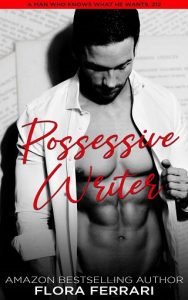 I’ve had a crush on Tanner Telford since I was a little girl. But meeting him? And discovering that he wants me? That just seems too good to be true.

That’s why I keep my guard up when I’m accepted into his creative writing academy. Tanner is a seven foot silver fox with a dark past and the most intense eyes I’ve ever seen. When he looks at me, it’s like I’m the only woman alive. But I just know he’d laugh if I told him how badly I’m crushing on him.

Then I make a mistake. I just can’t resist peeking through the door to spy on him, an alpha in his element, doing push-ups in his iron colored suit. He sees me looking … and this crazy, angry expression falls across his powerful features.

Me? A twenty-one year old orphan, wannabe writer, barista with a curvy build who’s never even had a boyfriend? It’s just so hard to believe that a thirty-nine year old sizzling hot bestselling writer with hordes of eager fans would want me of all people.

But Tanner is a man who knows what he wants. Now that he’s claimed me, he’s never letting go.