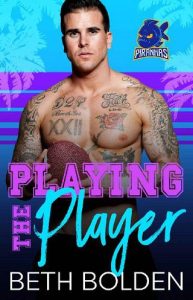 He came for football and for a chance at freedom—the freedom to live out of the closet.
But after a water main break, he lands an unexpected roommate, the new Piranhas kicker, Dylan Leonard. Between practices, games, and too many late nights on the couch, a best friend is exactly what he gets.
When Logan’s past rears its ugly head and threatens to destroy the freedom he’s hoped for, Dylan becomes more than just a friend. He becomes a lifeline.
But then their friendship gets incorrectly labeled as something more, and Dylan shocks Logan by suggesting they play along with a fake relationship.
Logan knows it’s off limits to fall in love with Dylan. He’s supposed to be straight, he’s his best friend, his roommate, and his teammate. But the closer they grow, and the more he and Dylan fake falling in love, the more real it feels.
The more real Logan wants it to be.
Making a play for love is the biggest risk he’s ever taken, but he wants it all and he wants it with Dylan.