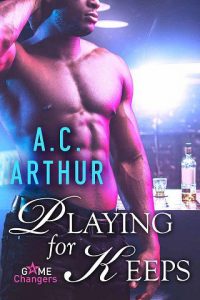 Delano “Del” Greer plays by the rules at all times. Especially after a scandal ruined his career at the police department and threatened to destroy his family’s reputation in his hometown of Providence. Now, he’s focused on establishing Game Changers as a reputable sports bar. Once a staunch adversary of social media, Del puts the success of the bar first and gives it a try, using a fake name of course. When his trial run quickly lands him in a steamy online affair he’s happy to play along, until he learns that the woman on the other end of those hot text messages is his sister’s best friend.

Working alongside her father at his auto body shop since she was six years old, Rylan Kent is the polar opposite of her beauty pageant winning sister. She’s been best friends With Camy Greer for about the same amount of time. So imagine Rylan’s surprise when she inadvertently learns the identity of the guy who responded to her drunken chat and continued to share explicit ways he could bring her pleasure. Now, Rylan has no idea how the temperamental and all-about-keeping-up-appearances Del is going to react when he finds out the woman he’s been talking sex with is actually the one he called “greasy-peasy” all through high school.