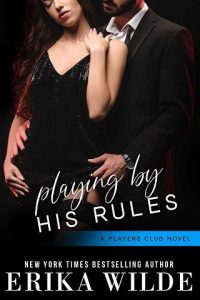 PLAYING BY HIS RULES is the next sexy standalone story in The Players Club series, featuring Rick Dunne.

All he wants is one week of her complete surrender . . .

If someone would have asked Madison Corbin what she wanted to be when she grew up, her answer wouldn’t have been an escort. But desperate times called for desperate measures, and when she finds herself being laid off from her job and in over her head in a debt that isn’t of her own making, being a man’s companion for the night—no sex involved—seems like a quick, easy way to pay off the bills that are piling up.

But she hadn’t counted on Rick Dunne, a breathtakingly gorgeous, sexy man who seems to know her deepest, most intimate fantasies without her even speaking them. He’s a gentleman in public and a hot as sin dominant in the bedroom. And he’s the one man who is able to fulfill all those dirty desires she’d imagined for years.

Her life is currently a mess, the kind that no man wants to take on his own. So, when Rick offers her a staggering amount to spend the week with him while he’s on his business trip, playing by his rules, she agrees. Their temporary arrangement was only supposed to be about physical pleasure, nothing more, and they’d go their separate ways . . . Except Madison could never have anticipated the lengths that Rick would go to make her completely his. (