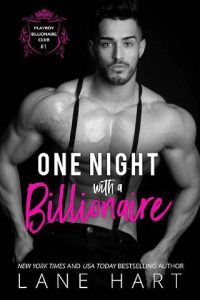 Meet three of the most eligible billionaires!

One Night with a Billionaire
Billionaire Harrison Avery always gets what he wants, and as soon as he sees Siena Butler, he’s desperate to have her. Too bad Siena has sworn off all men, especially gorgeous arrogant ones. She wouldn’t date the sexy rich boy for even a million dollars, which is exactly what he offers her.
Harrison never meant to offend the beautiful beach shop cashier when he gave her a million-dollar check. He was just trying to get her attention. How could he have known that Siena was fed up with men and would use the check to try and ruin him?
When Harrison buys up the beach shop where Siena works to pay her back, her opinion of him isn’t improved. But the more time she spends with her new “boss” the harder it is to keep hating him.
Two Nights with a Heartthrob
Hollywood heartthrob Micah James was happy enough partying his life away, sleeping with a beautiful woman every night, until he met Kylie Daines.
Too bad the feisty woman couldn’t get rid of him fast enough the morning after their one-night stand. To make matters worse, Kylie claims she doesn’t remember the sordid details of their time together.
Kylie wants to try and forget the night that she drank too much, took off her catering server uniform to burn it in front of party guests, and ended up in bed with a man she just met. She does, however, need another job, and fast, if she’s going to make rent. Her preference would be a position that utilizes her degree in creative writing and doesn’t involve serving food.
When Kylie shows up to interview with Micah for his personal assistant position, he assumes she’s there to pick up where they left off. Instead, she’s just desperate for a steady job with decent pay, and plenty of downtime so she can write.
While Micah doesn’t have many rules for himself, there is one that he refuses to break after it once wreaked havoc on his life – no sleeping with employees
Kylie is relieved when Micah offers her the job. She’s confident that she will never end up in his bed again and still insists that the first time was a huge mistake they should both forget.
But when Micah and Kylie suddenly find themselves trapped together during a snowstorm, the professional boundary lines they once agreed upon may slowly start to melt away.
Three Nights with a Player
Ainsley Kirkpatrick is tired of waiting for Mr. Right to come along. She’s ready to become a mother now, even if it means doing it alone.
When her best friend and next-door neighbor, Callihan Frasier, finds out she’s planning to pick a random donor for insemination, he jokingly tells her that she won’t ever find the perfect man in the database because he’s not in it.
Ainsley can’t deny that Cal really is the total package genetically – he’s healthy, handsome, and smart.
Cal’s definitely not ready to be a father, but he loves Ainsley. In fact, he loves her so much that he eventually agrees to donate his DNA to help her achieve her dream of becoming a mother.
When Cal goes to make his “donation” he gets stage fright, so Ainsley offers him an alternative plan – make a baby with her the old-fashioned way.
Cal can’t resist the opportunity to finally be with the beautiful woman who has repeatedly shot him down since the day they met.
And while Ainsley expects things to be awkward when the time finally comes to do the deed with her best friend, she’s surprised to find out that they have an explosive chemistry together.
The kind of chemistry that threatens to complicate and possibly ruin their formerly platonic friendship.