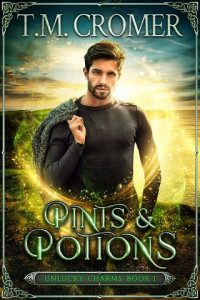 When the mighty Thorne pricks the heart of the Frozen, the end will be set in motion…

Sick of the unwelcome attention that comes with being a member of an extremely powerful family, Piper Thorne longs to escape her magical burden and live a mortal’s simple existence. On a whim, she adopts an alias and jets off to Ireland, where she stumbles into the path of the enticing rogue, Cian O’Malley. But she’s ill prepared to deal with the onslaught of emotions his wicked grin stirs up when he oh-so-casually turns up the charm.
A hardened, down-on-his-luck warlock, Cian O’Malley is determined to change his family’s plight and restore their stolen magic. In the midst of his half-baked plan to woo the bewitching Piper, he finds himself in a death match with an old enemy who’s carrying a monumental grudge.
Before long, Cian discovers Piper might just hold the key to reversing a two-hundred-and-fifty-year-old curse. He only has to keep them both alive long enough to solve the riddle written in the O’Malleys’ ancient grimoire and convince Piper to trust him with her heart.