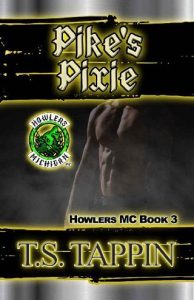 Rawley “Pike” Lehr is a lion-shifter, but he had kept that information from his best friend and his twin, Xander and Alyssa. They are aware that he’s a member of the Howlers MC, but he keeps them out of that part of his life. Xander moved across the country to pursue a career as a stuntman, asking Pike to keep an eye on Alyssa and keep her safe. Pike is more than happy to do that since he had been lusting after Alyssa for as long as he could remember. He has no plans to act on it until he sees that lust shining back at him from her eyes.
Alyssa only ran from Rawley after that jerk Larry assaulted her at work because she had gone to Rawley for comfort and to feel like a woman, but Rawley went into protector mode and left her waiting at his house for him to return. When Rawley comes walking into her new place of employment and asked why she ran, she hadn’t seen him in months. His beard and hair had grown quite a bit and she liked it. She must have shown that interest a little too much because he wouldn’t let things go.
During a showdown at her home, she revealed what she had always wanted from him. She expects him to balk and remind her they are just friends, but Rawley tells her if they go there, he’s never letting her go. Then, he walks out her door and leaves her to make the biggest decision of her life. Does she risk the friendship she holds so dear and angering her brother? Or does she keep the status quo and never know what it really feels like to sleep in his arms?