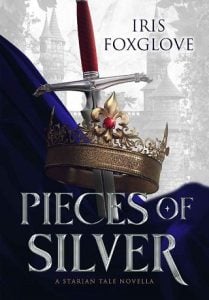 The coronation of King Adrien de Guillory is fast approaching, but there’s one problem: The crown of Staria is missing. Captain Ferrin Leonhart only has a few clues to go by; A young thief caught in the wrong place at the wrong time, rumors of a man in a green cloak, a city guard captain who knows too much… and Silver, the royal tailor and former thief.
Determined to prove he’s left his old life far behind, Silver offers his assistance to help Ferrin find the culprit…after all, no one knows how a thief operates better than someone who used to be one. And it doesn’t hurt that he’s been quietly pining after the handsome guard captain for years, either.
Ferrin has always chosen his duty to the crown over his desires, but now he finds himself drawn to the clever, excitable Silver as they work together to try and recover the priceless artifact. But with enemies lurking in the shadows and the coronation only weeks away, they’ll need all their wits about them to recover what was lost…and celebrate what they’ve found in each other.

(This novella is a published version of a story first posted to Patreon for House of Onyx tier members. It includes a bonus scene with Emile/Bazyli, also previously published as a Patreon bonus.