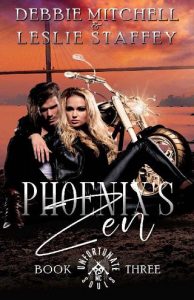 Phoenix has led a tortured life. From childhood, he’s held dark secrets inside. He’s rose like the phoenix to come back from all the pain he’s dealt with his entire life. He’s never told his stories to anyone, not even his club. Zen leaves India to be with her friend Elle. The friend that stood by her side when her own world came crashing down at seventeen. There is no way she wouldn’t be there for her now. Zen has completely healed, even getting degrees so that she can help others. She wasn’t planning on meeting and falling for the most closed off man she’s ever met, but she does. Can she break down the walls he’s spent so many years building?

Phoenix has buried the wounds so deeply down, but when the club rescued a little girl, that’s led a similar life, it all comes rushing back. He wants to let it all go, to heal, can he? With the help of Zen, maybe there’s a chance to not only heal himself while being the supportive family member to Brenna that he never had. He won’t let her grow up to be broken like he did.When the past comes face to face with Zen, she realizes that maybe she’s not as healed as she thought. When danger and the possibility of death hit her head on, what will she do? Can she save herself?