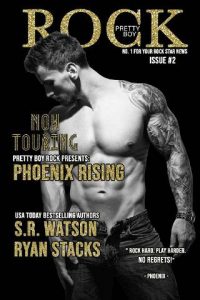 Phoenix’s darkness has been let out containment. He’s tasted submission again, and he’s not willing to turn it off. Problem is … not just any woman will do.
Harlow has managed to be the only woman to conquer Phoenix. He gave her a glimpse of his brand of kink, and she opened her mind to the possibilities …
That is, until his secret was prematurely revealed. He tilted her world on its axis and not how he intended. She wants nothing to do with him now.
He won’t beg. He won’t chase. If she knows what’s good for her, she will keep running.
Phoenix is cocky, hardheaded, and likes to indulge in the rock star lifestyle. Harlow will not break him. He will let his demons run free. They don’t define him because he makes the rules. He decides who gets a taste. His band, Phoenix Rising, is taking their show on the road. There will be too many women vying for his attention to get caught up with just one.
Time to get back to the man that he is …
Rock hard. Play harder. No regrets!