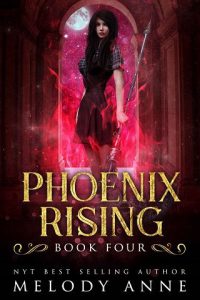 Pushed to the edge of darkness, Phoenix will find out who her true friends are in this exciting, frightening, brand new world she has now found herself so much more a part of than she ever would have chosen.
With the surprising death of those we never expected to lose, as well as the total annihilation of the West Coast of the United States, Phoenix has to come to terms with a brand new reality she doesn’t know how to face. Does she choose to fight for the people, or should she save herself and those she loves most? And why would Josiah choose her to be the new savior of the world?
Johnathan has now aligned himself to the dark side, and Phoenix finds herself devastated as he sinks into the darkness with Jessica by his side. She’s never been without her brother, and now that he seems to be the new leader of the darkest force, does she have no other choice other than to fight against the one she loves most?
With Jayden, Sadie and Brian by her side — the only constants in her life, she will fight this evil that has overtaken her planet, and she will either die trying or she’ll manage to save the world. Little does Phoenix know, though, that there are more forces against her at every corner.

** This was previously released in 2014 as Midnight Eclipse; Rise of the Dark Angel. Significant changes were made in deleting and adding material and changing the storyline. **