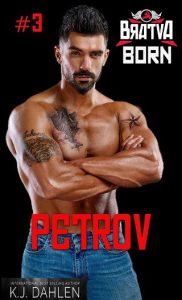 Petrov:
When Koyla and Mikial’s story came out, Petrov decided to look into the past a little deeper. While most of their story had been proved, one part of it hadn’t even been looked at. Boris Ludenvic died in a beat down in prison by a man that had come looking for him.
But why? Who was this man and what happened to him after he got out of a Russian prison? That was a secret from his own past… one Petrov barely remembered. He dug deep to find the answers he was looking for.
Then he found her… his Uncle Artem called her Bonnie but she told them her name was Bonita. The man that had hurt Artem and her was her own half-brother. Then she asked Sergi to stop her brother once and for all…

Bonita:5
All my life my father used me against his other family… They hated me and I hated them. I also detested my father. So much so, I turned him in for a murder I watched him commit. He never saw that coming and I had to escape.
I’ve been running for my life for the last five years, then I met him…Petrov and I finally stopped running. Now for the first time in a long time, I have to trust someone else and that’s scary…