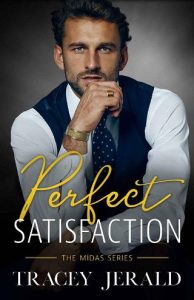 It wasn’t my fault the jewel from my ring popped free and landed on the carpet in the first-class cabin on my way to Sin City. At first, I was too busy crawling on my knees, searching, to notice him. When he dropped to help me find it, how was I to do anything but focus on him?
I could have thanked him, leaving the temptation lurking in his jade-green eyes on his side of the aisle. He stalled that move by ordering me a drink, luring me in with humor, self-depreciation, and the one thing guaranteed to make my insides quiver.
Honesty.
Considering who my family is, I should have ignored the electricity between us. I didn’t. Bearing in mind my personal interactions with the press, I ought to be terrified of his presence. I wasn’t.
After our first night together, we became inseparable. In such a short time, he became my center. Lost in our haven amid the chaos of our lives, we were everything I never had.
But nothing perfect lasts forever.
Called to the carpet by the devil, I was informed my love—Arek Ronan— isn’t just any entertainment reporter; he’s the owner of StellaNova—a social “news” site revealing secrets left and right with only a thought to rankings.
I had a choice to make between two different loves. This time, I did the right thing.
Didn’t I?
But something’s happened. Now, I am being forced to live with Arek. It’s depravity, torture in its purest form. By the end, I know I will be a candidate for Bedlam after dealing with the man who chose to destroy my heart.
And him? He’s out for satisfaction. However he can get it.