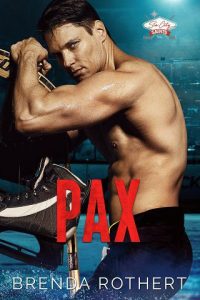 In peak physical shape from hitting the gym hard in the offseason? Check. Officially the highest paid defenseman on the Sin City Saints? Check. Faking a relationship with a woman he’s secretly crazy in love with? Yeah, that’s a big check.
The son of a legendary pro basketball player, Pax Bishop was poised to follow in his father’s footsteps when life took him in another direction. Now a pro hockey player, he must find a way to reject the advances of the daughter of his team’s new owner without offending her.
Kylie Thomas gives Pax the perfect out. She’s single, and pretending to be attracted to her? That won’t be an issue for Pax, because he’s secretly had it bad for her since the day they met. He can’t let his true feelings show, though, because not only is Kylie a single mom and a widow, she’s Pax’s teammate’s sister.
Sometimes the truth hurts, but it can also be deeply, maddeningly good. The stakes are high as Pax opens his wounded heart in hopes he’s not the only one whose feelings are more than just a bluff.