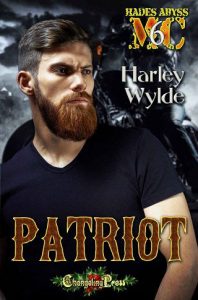 MaryAnne — I was sixteen when I learned a hard lesson. No, it wasn’t a lesson. It was worse. Kidnapped, tortured, abused in the worst of ways… I’d thought my life was over. Until the day my knight in shining armor came to save me. Patriot. Despite how scary he looks, he has to be the kindest man I’ve ever met. He not only rescues damsels in distress, but animals too. Under that hard exterior is a heart of gold. It doesn’t matter that he’s older than me. The more I get to know him, the harder I start to fall. But why would a man like him ever want someone like me? I’m dirty. Damaged. Broken beyond repair. Or am I? After all, Christmas is a time for miracles.

Patriot — From the moment I saw her, she’s had me wrapped around her finger. I’ve done my best to chase the fear and shadows from her eyes, show her she’s safe. I’ve taken out nearly every man who ever hurt her, even if she doesn’t know it. And the two who are still standing won’t be for long. I want to see her smile. Make her laugh. What better time than Christmas to prove to her life is worth living? I’ll make it the best she’s ever had!

But there’s only one thing I want under the tree this year… MaryAnne. She deserves better. I’m no angel. I’ve killed. Lied. Stolen. And worse. I tell myself repeatedly to keep my distance… until I can’t. One taste and I know I’ll never walk away. MaryAnne is mine! And if she won’t listen to me, then maybe my whacky parrot can convince her. If there’s one thing the African Grey excels at, it’s talking when he shouldn’t.

WARNING: Patriot contains scenes of graphic violence and sexual content, bad language, and abuse. But it also has a happily-ever-after, a tiny feline terror, the most patient dog on the planet, and a bird who always has to have the last word.