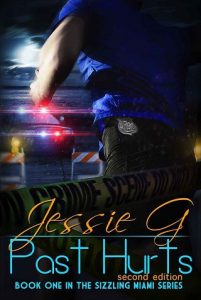 Before they can get back together, Alaric and Davin will have to unravel the secrets that tore them apart.

Abandoned by his mother and raised by a judgmental, homophobic father on the unforgiving streets of Overtown, Davin Monroe knows a lot about survival and little about love.
As heir to the family business, Alaric Bennett’s innate strength makes him the pillar upon which the family problems fall, but leaves him emotionally abandoned by those that need him.
One chance meeting and five beautiful years together do not prepare them for the dark, depraved jealousy threatening their hard-earned happiness.
Now a killer has forced Detective Monroe to face the past and the only man his heart has ever wanted. With only one shot at redemption, Alaric is determined to uncover the truth and bring his lover home for good.
Before they can get back together, Alaric and Davin will have to unravel the secrets that tore them apart. But will the truth be enough to heal their past hurts?

***Past Hurts is the first suspenseful novel in the Sizzling Miami Series. Originally published in 2014, Past Hurts has been rewritten and expanded, adding more than twenty thousand words to the overall story. If you love mystery and second chance romance, then you’ll love this newly expanded version by Jessie G.***