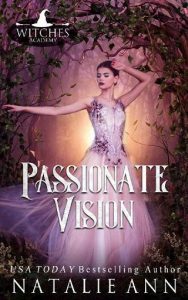 Claire Snow hasn’t always been accepting of her inherited gift. Feelings of being different have forced her to live her life alone and minimize any human contact. She’s found her passion and that is all she really wants to focus on. If only she could get control of her powers enough to let her enjoy it.
Holden Montgomery doesn’t want his inheritance with the strings attached to it. What he wants is to be accepted for who he is. He wants to make his own decisions in life and his own career. He takes time away to focus on what he needs to do to succeed and finds a little help from a mysterious woman he met in the woods.
Can this witch help Holden find his focus to follow his dreams?

A waitress attending night school at the academy discovers, along with the gift of magic, she has royal blood flowing through her veins. America’s latest foodie channel sweetheart is a real charmer, who discovers not all the magic happens in the kitchen. Clair struggles with taking control of her magical powers until she meets a guy who really needs her help. A beautiful witch, empowered with the gift of creating strong magic spells since childhood, now refuses to use them––until her friend’s murder changes everything. An investigative reporter’s strange visions force her to really use her powers. When a rival tries to mess with her magic a witch must find a way to rekindle her flame.

What do eight enchanted witches have in common? They’ve all attended the Witches Academy of Sorcery in the Big Easy, the foremost school of magic in the world. From coast to coast, each of these bewitched women will work at becoming who they are meant to be, using their powers to the fullest capacity.