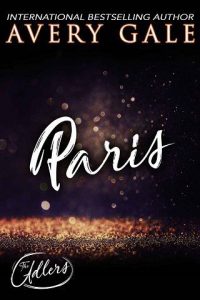 Paris Adler is fed up…

She’s spent her entire life being bossed around and sheltered by nine older siblings… NINE! Just as she’s ready to spread her wings and fly, a stalker sends her life into a tailspin. What starts out as notes and small gifts, quickly escalates during Paris’s last year of college. Opting out of graduation, she hopes to fly under everyone’s radar with distance.

Leaving her politically connected stalker on the west coast, Paris agrees to housesit for her newly married sister, London. Interviewing for her dream job sweetens the deal, and Paris hopes she’s managed to avoid telling her brothers and sisters what a train wreck her life has become.

Paris only has one problem with the small town her sister now calls home. Trinity Stone. The local sheriff is the most annoying man on the planet and Paris can’t stop thinking about him. He can keep her safe, but has she simply exchanged one stalker for another?

Trinity recognized Paris Adler as his mate the moment he stepped up to her car. Stopping the little hellion for speeding, his anger about her over the top driving quickly morphs to frustration his beautiful mate is endangering herself driving like her tail is on fire.