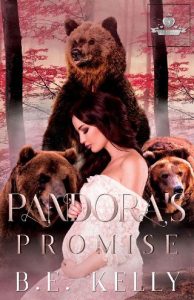 Pandora played the fool for the very last time. She let the three sexy bear shifters use her and now, she was pregnant and on the run. How could she face them knowing that she was stupid enough to get herself knocked up? They promised her one night of fun and she foolishly agreed to their “no strings attached” rule. The only problem was she was dealing with the fall out from their incredible night together and the one giant string that was still attached—their baby. Pandora had just three months to figure out what to do about the little life she was about to bring into the world because turning to the three bear shifters she wanted wasn’t going to end well for her. She needed to get her life together before her child came into this world—it was only fair. No kid should have to deal with a mess of a mother who couldn’t seem to get her life together. The only question she couldn’t seem to answer was how to hide the fact that she was carrying their cub, when the three bear shifters unexpectedly show up in the town that she’s hiding away in. She was done with running, done with hiding, and done being afraid. She was about to become a mother and she was going to be fierce—if not for herself, then for her cub.