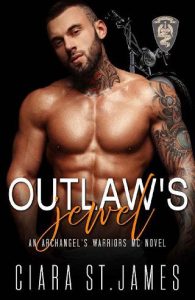 Outlaw loves his life with his club, spending his days and sometimes nights working his magic on his computers for his club. He hasn’t thought he needs anything else. Or at least he didn’t until he lays eyes on Tarin with his club brother, Bear. The attraction is instant and so is his anger. Bear has an old lady, why is he with another woman?
Assumptions are made, things are said, only to find out Tarin is Bear’s daughter. The daughter he never knew he had. Outlaw wants her for his own, but she’s resisting him and he doesn’t know why. He’s determined to break down those walls she has around her heart. He will find out what it is she’s hiding.
Tarin is shocked to find her mother’s journal after she dies. The journal that tells her the man she thought is her father isn’t. She sets out to find her real dad. All she wants to do is meet him. She never imagines what it will be like entering a motorcycle clubhouse. She gets to meet her dad and his new family. Also, she gets to meet a man who fascinates her and scares her to the core.
Outlaw can’t be deterred and she can’t seem to resist. However, she’s got scars she keeps hidden and he’s trying his hardest to know what they are. She’s too ashamed to ever tell. Only Bear and Outlaw won’t leave it alone and when that secret comes to light, it may just lose them her forever.
Only there seems to be someone from her past who knows the truth and is determined to make her pay for something she didn’t do. It leaves her having Outlaw and his club to fight for her. A betrayal close to home is discovered. More ugliness is discovered. In the end, all they can hope is that they’ll come out on the other side intact and that she’ll forever remain Outlaw’s Jewel.