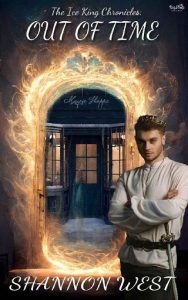 Glorfindel, the handsome, sometimes treacherous Fairy Prince, has returned home in disgrace to his family after being caught by King Stefan in a compromising position with someone else. Kicked out of the Elven Realm, Glori is heartsick at how his romances never seem to work out. First the Quendi ice king rejected him, and then the Dark Elven King Stefan—why can’t Glori ever find true love?
Not that he ever believed in it really. He was convinced that “true love” just didn’t exist. Lust, yes, and maybe a craving for romance, but true love? No way. That was simply a fairy tale. At least part of the blame for his troubles lay with a curse placed on him by an evil pixie, who blamed him for her “broken heart.” She laid a curse on him—one that has been in place for many years—since long before he went to the Elven realm.
His father calls in help in the form of a Sidhe Fairy who’s also a Timeroamer. She decides that since he’s cursed not to find love in the Fairy Realm, he must go somewhere else. She takes him a hundred years into the future to the town of Salem, where her great grandson, Ethan, also a witch and a powerful Time Roamer, has a souvenir and magic shop. He agrees to help—mostly to get rid of Glori—but things have a way of not going to plan where Glori is involved.
Something evil other than the curse is stalking the troublesome Fairy, and it will take all of Ethan’s skill and a brief trip back to the Quendi Forest to discover the truth and help Glori find his happiness at last.