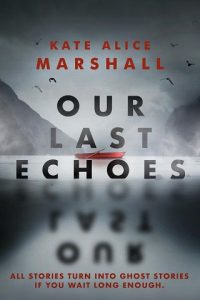 Kara Thomas meets Twin Peaks in this supernatural thriller about one girl’s hunt for the truth about her mother’s disappearance.

Sophia’s first memory is of drowning. She remembers the darkness of the water and the briny taste as it fills her throat. She remembers the cold shock of going under. She remembers her mother pulling her to safety before disappearing forever. But Sophia has never been in the ocean. And her mother died years ago in a hospital. Or so she has been told her whole life.

A series of clues have led Sophia to the island of Bitter Rock, Alaska, where she talked her way into a summer internship at the Landon Avian Research Center, the same center her mother worked at right before she died. There, she meets the disarmingly clever Liam, whose own mother runs the LARC, as well as Abby, who’s following a mystery of her own: a series of unexplained disappearances. People have been vanishing from Bitter Rock for decades, leaving only their ghostly echoes behind. When it looks like their two mysteries might be one and the same, Sophia vows to dig up the truth, no matter how many lies she has to tell along the way. Even if it leads her to a truth she may not want to face.

Our Last Echoes is an eerie collection of found documents and written confessionals, in the style of Rules for Vanishing, with supernatural twists that keep you questioning what is true and what is an illusion.