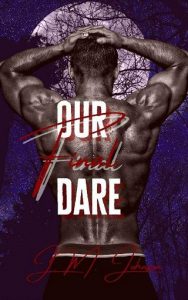 Eros and Sophia have been friends for as long as they can remember – arguments, drama, gossip, relationships, and breakups. They’ve been through it all. So, when Eros begins to see Sophia in a new light, he can’t think of anyone better than her as his mate.
He grew up in the comfortable protection of his parents love – a love that had transcended beyond the realm of death and back again. He pictures the same love whenever he lays eyes on Sophia.

But there’s something about Sopha. Something she tries to keep hidden. The more Eros thinks about her, the more he begins to question everything he knows.
Where does Sophia disappear to for months on end, and why does her family always seem so nervous?
Khaos and Violet are getting ready to step down as Alpha and Luna of the Blood Moon pack, and Eros is ready to fill their shoes – he wants to do this with Sophia by his side, his mate for all eternity, but something tells him, he might just be destined to be alone.

Sophia is hiding something, something that will change them forever, and make them question everything they’ve ever known. She’s not as she seems, and in a world that can’t and won’t accept change, she’s destined to live on the outskirts.
Just when all seems to be lost, a new Alpha enters the picture. An Alpha that says Sophia belongs to him. He’s never been more out of his depth, and with the Moon Goddess absent and Hades slowly taking over as the leader of the wolves, things have never been more dangerous.

Join Eros in the final instalment of the Khaos Trilogy as he tries to fight for Sophia, keep his family safe, and protect the future of his pack.
Who will survive the final fight – in this world, there can only be one winner.