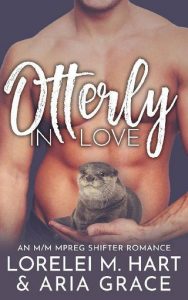 Sometimes the past holds your future…

Omega otter shifter Doc loved his adopted son and wanted to protect him from his past. But when the boy’s past flings itself at him in the form of a series of letters, Doc is faced with the heart wrenching decision of either ripping open old wounds or keeping unforgivable secrets from the child.
Rabbit shifter Levi hates his life as Alpha of his Colony. Put there by birthright and held there by his past, he has no choice: If he leaves, they will kill his one true mate. Rabbits were brutal like that.
When the colony is all abuzz with word of a stranger in town, Levi doesn’t expect an otter and he certainly doesn’t expect the man to be the bearer of both the worst and the best news of his life: His mate was gone and he had a son. And he most definitely doesn’t expect to have his rabbit announcing the man as his mate.