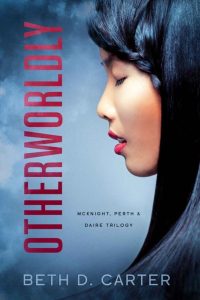 Charlotte Perth is all about sass because her job reminds her all too well the limits of human life. She’s clairvoyant but her gift is unique. She can only summon murdered souls and interprets the visions they send her. When she’s hired by a wealthy woman to determine the fate of her great nephew, little does Charlotte realize this is one ghost that refuses to cross over.
Detective Jonas Daire feels Charlotte is a fake, out to swindle money from his rich aunt. When Charlotte proclaims the nephew is not only dead but has been murdered, Jonas feels especially disgusted at Charlotte’s “profession”. But when his cousin’s body is discovered in the place that she said it would be, with detailed accounts of how he died, he places her under suspicion.

Jonas and Charlotte work together to find the killer. As the two grow closer together, another malevolent force won’t stop until the truth is buried…until Charlotte’s ghostly visions are her own.