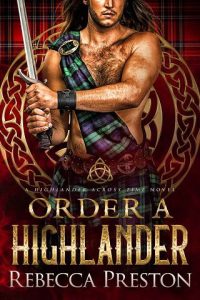 When Ruth travels to Dunscaith to investigate an ancient serial killer and accidentally steps though a door that thrusts her back in time to ancient Scotland, she must not only face her budding feelings for Liam MacLeod but also survive the very killer she was researching…

Successful mystery writer Ruth Roseworth is obsessed with one of the oldest serial murders in history, who happened to operate near Dunscaith Castle. To search her new book, she travels there, to the Isle of Skye, but accidentally ends up in ancient Scotland during the killing spree.

Veteran member of the castle guard Liam MacLeod has a reputation as a local monster hunter, and the rash of deaths among his guardsmen leads him to believe an evil sidhe is responsible. When Ruth appears from the future and informs him the serial killer is very human, he’s less than impressed with the time-displaced writer trying to tell him how to do his job.

But when Liam himself becomes a target for the killer they hunt, he’s forced to acknowledge that Ruth is just as big of a distraction as his ego. The two must work together to protect the residents of Dunscaith while also grappling with the growing feelings they have for each other. If they can’t find the murdered soon, they may end up as one of his many historical victims.