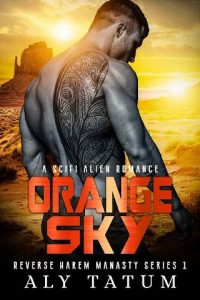 She imagined she will meet a guy on her vacation. And she did.
Right after she crashed on his planet.

Brynn Anderson is on her way to a dream vacation in Japan. The next thing she knew she got kidnapped by aliens and crash-landed on an orange planet. The first guy he met is a big towering muscled alien with blue eyes tinged with yellow and slit like a cat. Let’s not forget he has striped fur on his body and a long tail. She got injected by something that is making her want to breed. Too bad someone forgot to fully download her translator so she can communicate with him.

The planet, Manasty, is on the brink of extinction. Very few of the inhabitants are aware the female eggs harvested before the Plague are dwindling. There are no other female races in the universe that are compatible with the males of their species to reproduce.
Zirc is on a mission to find a relic that the Elders said will unite their planet. Not just extinction but war is brewing on the horizon. He found the relic and an alien female. Duty dictates he reports this to the authorities but something held him back. She smelled good enough for him to keep. He never did like females from nearby planets or the ones visiting their planet. Except when sharing with his lovers. So she’ll keep and share her. On this planet, having sex with multiple partners is the way to find one’s true male mate.