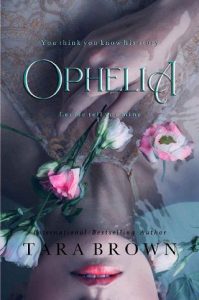 “You think you know his story.
Let me tell you mine.”
For generations, the Agards have served the “kings” of New Denmark, a city controlled by the Jacobi crime family.
Ophelia Agard has spent her life dreaming of being free of it all, and now at nineteen, that dream has the chance to become a reality.
Until her fate is forcibly tied to the young prince of New Denmark, who is destined to be king.
Ophelia is pushed into the den of temptation, put there by her own mother, a woman desperate to see her family advance.
But Ophelia’s heart is won over by the one person she is meant to deceive.
Prince Lucas Hamlet Jacobi, a young man who favors freedom over family and has no interest in taking over the kingdom.
His father’s untimely death has all eyes on him, but he finds himself in the middle of a grand conspiracy.
And standing next to him is none other than the one girl he promised he would never love.
Forbidden romance whirls in the air amidst war and a plot to take over the city.
But this is not a love story.
This is a tragedy.
This is a tale of ghosts.