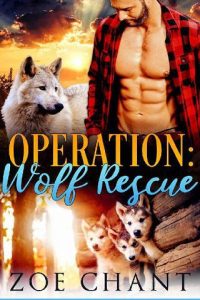 Four puppies (one of them his lost nephew… but which?)
Three days trapped in a motel with his oblivious fated mate.
One bed.

When someone on the mountain wants to surrender a pack of wolf-hybrid pups, animal rescue volunteer Pearl Nguyen throws some puppy chow and her biggest crate into the back of her station wagon, and she’s on her way. She can handle four wolf-hybrid puppies, even if she was only expecting three, but she didn’t expect the storm, and she definitely didn’t expect Cassidy Madsen.
Cassidy Madsen, six feet of tough cowboy wolf shifter, only wants one thing: to find his lost nephew and to get him home safe. Then he lays eyes on Pearl, his fated mate, his one and only, and suddenly everything is much more complicated.
Stranded in a motel with a pack of adorable puppies and only one bed during the storm of the century, Pearl’s losing her heart faster than she ever imagined possible. Cassidy has to figure out how to tell her they were made for each other and that he and one of her rescue pups are wolf shifters without sending her screaming into the night.

Can Cassidy convince her that she belongs with him, and will he ever figure out which puppy is actually his nephew?