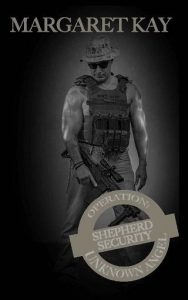 Shepherd Security Operator Danny ‘Mother’ Trio is a proud United States Marine Raider, the Marine Corps’ Special Forces Team. He is calm and steady. He has always put his brothers and sisters in arms, the team, and the mission first. He has an online friend he’s never met. He has played word games against her for five years. Just seeing a message from her in the in-game chat screen, always lifts his mood. Messaging her and playing his games against her is the last thing he does before a mission and the first thing he checks after. He knows very little personal identifiable information about her, but he knows that she is a good person, a highly intelligent and engaging woman who is just as competitive as he is. On-line, they have an amazing relationship that he treasures. After a particularly rough mission, he decides he wants to meet her.
Dr. Annaka Sanchez loves her life. She’s a marine biologist lucky enough to study beluga whales in their natural habitat. She’s never been one who thinks she needs a man in her life and a relationship hasn’t fit into her busy life. But there is one man who she has been playing a scrabble-like on-line word game against for years who she loves to chat with in the in-game chat function. At times, their chat has been flirty. He is funny, smart, and a competitive player, traits that she finds attractive. All she knows about him is that his first name is Danny. She doesn’t know how old he is, where he lives, or what he does for a living, but she has fantasized about meeting him.
When danger finds her, Mother and the Shepherd Security Team will use all their skills and training to find her, protect her, and bring down those responsible!