Home
contemporary romance
Only One Boy by Maggie Dallen (ePUB) 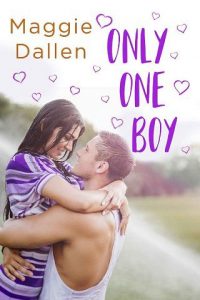 There’s only one boy Celia would NOT want to be stuck sitting next to on this interminably long train ride. So guess who just walked on board…

Clearly the universe has a sick sense of humor. That’s the only explanation Celia can come up with when she finds herself alone on a train with her crush since second grade. Maybe some girls would call this fate. Destiny, even. But Celia knows better. This is cruel and unusual punishment, because Heath is also the one boy who turns her into a stammering, incoherent fool. And that’s before he kisses her senseless.

Heath’s not exactly jazzed about this turn of events either. He’s supposed to be on this trip with his girlfriend. But now his girlfriend is his ex and he’s trapped on a train ride from hell with the one girl who apparently hates his guts. Cool. Looks like everyone is in for a good time.

Except, one derailed train, a shared motel room, two unexpected detours, and a few steamy kisses later, and maybe, just maybe—they’re both about to change their tune.