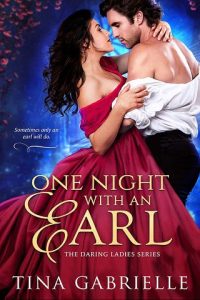 Ana Gardner is determined to lose her virginity before her thirtieth birthday. She’s no stranger to fake identities, having posed as a chaperone since the scandal that destroyed her titled family. So she dons a mask, changes into a low-cut red gown, and attends the city’s most elite brothel, the Silver Chalice.

Oliver Bedford, the imposing Earl of Drake, is only at the Silver Chalice to appease his debauched friends—until he spots Lady Scarlet. She’s refreshing…and a complete mystery. Certain she’s a lady in disguise, Oliver is determined to learn her identity, but she eludes him at every turn.

The night with Oliver was unforgettable. But when he arrives at her employer’s home, she’s horrified to discover her lover is the Earl of Drake, the son of the man responsible for her father’s death and subsequent family ruin. And that he’s there to court her young charge.

Oliver never had any interest in the debutante, but he is drawn to her chaperone—a woman he soon realizes is his Lady Scarlet. Now that he’s found her, she claims she wants nothing to do with him, even though her kisses say otherwise. Fortunately, Oliver is not one to give up when he finds something he wants…and he wants Ana. In his bed, and in his life. Forever. But first, he must persuade her to trust him—and to believe that one wild, passionate night can turn into forever.