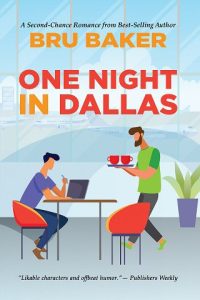 One Night in Dallas by Bru Baker – Free eBooks Download

Over a decade ago, Avery Laniston fell in love with his brother Bran’s best friend but walked out on him and married his career instead. He’s regretted it ever since. After twelve years abroad, he returns for Bran’s wedding, hoping to make amends—only to get stranded in an airport with the man he left behind.
When Paul Gladwell finds himself stuck in Dallas with Avery on the way to Bran’s wedding, he decides a one-night stand might be the ticket to closure. Instead it rekindles a spark that threatens to burn him a second time. The romantic atmosphere at the wedding venue doesn’t help, nor does scheming from their friends and family. But the worst culprit is Paul’s heart, which refuses to listen to his head’s warning that Avery hasn’t changed.
Avery knows he hurt Paul before, and he’s determined to make it right. But he doesn’t know where his next job might take him, and Paul is hesitant to trust him again. Can Avery prove he’ll be the partner Paul deserves—that he can balance his career and his personal life? Or will he add one night in Dallas to his years of regrets?