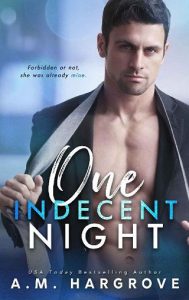 The day I saw Sylvie West standing next to the bride,
something moved in me I was certain had died.
I’d known her since she was a pain-in-the-ass kid, but she was my best friend’s cousin,
and off limits.
He also told me he’d strangle me if I ever laid a hand on her.
When she downed tequila like water at the reception, and then danced on the table, all bets were off.
She was my kind of woman, and forbidden or not, I was going to make her mine.
Only when morning broke, I woke up to a different Sylvie—one who didn’t remember a single thing about the passion-filled night we’d shared.
Now, I had to prove I was the one who was meant for her.
After she put up one obstacle after another, the time had come to pull every trick out of my hat.
And Sylvie had no idea I was one tricky bastard.
But the last thing I ever expected was for her to turn the tables and play the final trick on me.