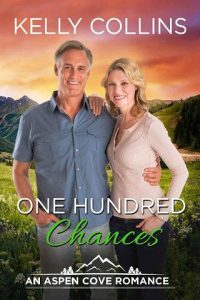 Welcome back to Aspen Cove, where there is always a second chance for a first love…

Veterinarian Sara Arden made a mistake when she was a sixteen-year-old girl. The mistake wasn’t in falling in love with rancher Lloyd Dawson. It wasn’t even in getting pregnant. Sure, that part could have waited, but the mistake was in never telling him she had his daughter. Now, thirty-two years later, she’s back in Aspen Cove with her daughter, Reese. And this time, there won’t be any denying the truth.
Lloyd Dawson had lost a lot over the years. He’d had two great loves in his life—Sara Arden, who’d left him thirty-two years ago without a word, and Carol, who died in his arms several years ago. One was never coming back, but the other is sitting right there in front of him. But all he can see is the woman sitting next to her—the younger woman who is staring right back at him with eyes just like his. With betrayal twisting in his gut, Lloyd knows he’ll never be able to forgive Sara for robbing him of watching his child grow up.
When things go bad at the ranch, and Lloyd needs a veterinarian, Sara is his only choice. Will his crisis give her the chance she needs to make things up to him? Or will it be just another opportunity for her to betray him?