Home
contemporary romance
One For Sorrow by Marlow Kelly (ePUB) 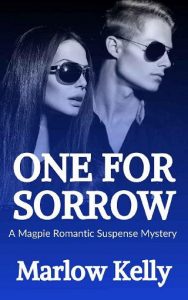 She thinks he’s her sexy new partner.
He thinks she’s a thief and he’s been sent to investigate her.

Georgina Scott has spent her whole police career as a community officer trying to protect the citizens of Magpie from her drug-dealing father, Hank Scott. But when she suffers a head injury apprehending one of Hank’s customers, she realizes that her days as a cop are over.
Drugs have been stolen from the Magpie Police Service evidence locker and have found their way into Hank Scott’s hands. Liam Mason is sent to investigate. Working undercover, he focuses on his prime suspect, Georgina Scott. But the case hits a bump when Georgina is injured and placed on sick leave.
When she witnesses a daring armored car robbery, Liam suggests they look into the crime together. But he wasn’t expecting to be physically attracted to her or like her. Is she a cunning woman who’s hiding her agenda? Or is she exactly who she appears to be, a strong woman who’s fighting to protect the people of Magpie from her father?