Home
Romantic Suspense
Once And Always by Margaret Watson (ePUB) 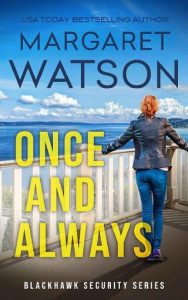 HE KILLED HER FATHER THIRTEEN
YEARS AGO. NOW HE’S COMING FOR HER…

Zoe was still in high school when she saw her father shot dead by a classmate obsessed with her, and then still a kid, witnessed the killer’s sentencing. A horrible tragedy, but now, thirteen years later, she’s thoroughly rebooted her life.
She’s the CEO of her own cyber security company, a celebrity in her field, and a speaker in high demand.
She’s just the kind of strong, self-reliant woman who can take care of herself in any situation.
Except the one she’s in.
She’s got a stalker.
And she already knows he’s a killer.
Given her background, Zoe knows instantly that she needs protection and she knows how to get it—her sister Mel’s the owner of Blackhawk Security.
But trust Mel to send Spence Flynn, the one agent Zoe can’t be alone with, but not because they don’t get along. It’s because attraction sizzles between the two of them like runaway electricity. And because they both know the last thing a body guard should do is get into a relationship with his principal.
It’s unethical and dangerous.
But how are they supposed to fight this thing? Spoiler: Good intentions suffer a knockout in the first round. And then, to the delight of the reader, the earth moves in the most delicious way.
Meanwhile, Zoe’s stalker is still sending her charms from a bracelet he stole from her thirteen years ago, the scariest being a heart he’s had engraved with both their names. Unnerving enough– and then he starts dropping off lunch for her, tailing her in a white Subaru, and trying to break into her condo.
Spence has his hands full in more than one way. And Zoe has a public appearance coming up. The perfect time for a stalker to strike.