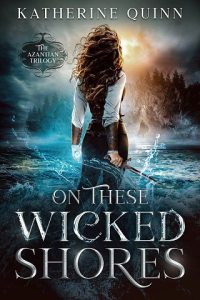 A king chased by the demons of his past. A merciless god seeking redemption through bloodshed. And the woman whose very existence defies possibility.

It’s been three months since Margrete Wood defeated her depraved father and saved the mystical island of Azantian. But the monstrous creatures released that night have hidden themselves in the human realm, and Margrete and her king set sail to hunt them down.
When disaster strikes on the high seas, Margrete and the crew find themselves stranded on the shores of a new and dangerous island. It’s there that they come across an ancient coin, one that legend claims belonged to a powerful goddess. It signifies the first of three deadly trials that must be completed. If they fail these tests, they forfeit their lives to the very place that traps them.
As Margrete and Bash struggle to survive gruesome horrors lurking around every turn, a mighty god watches. He’s waited centuries for this moment, and in Margrete, he sees the queen he’s been searching for.
Once the third and final coin is found, Margrete and Bash will discover if their love can conquer all… even death itself.
The second book of this exciting fantasy trilogy is perfect for readers who love high-seas adventures, swashbuckling heroes, and forbidden, steamy romance. Fans of NOT ALLOWED’s A Court of Thorns and Roses and The Hunger Games will be enthralled.