Home
contemporary romance
On the Ropes by Willow James (ePUB) 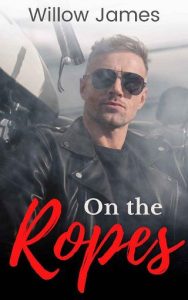 A forbidden love, a long-lost bad boy, and a small town with no secrets. What could possibly go wrong?

Joe Reid has kept his distance from Walton for a reason. His best friend’s little sister. When they were just teens, he struggled to keep her at arm’s length, but now that he’s back, he’s wondering just how much trouble it might be. Her big brother is the state Golden Glove’s champion, and she’s no longer little. A towering, lithe blond, Liz is just as off-limits as she was before, so how is Joe going to pursue his dream, return to the place he’s always thought of as home and avoid kindling the passionate romance threatening to erupt between them?

Liz King is focused on building her new catering and event planning business with her best friend Ivy when the one guy she said she never wanted to see again settles back in town. Joe Reid. He was her brother’s best friend when they were kids, and he stole the perfect kiss on the rocks by the shore when she was just thirteen. Then he disappeared. That story-book moment all but ruined her for other guys, but she’d made the decision to move on, which meant she had to steer clear at all costs. But with Walton being the small New England town it was how was she going to manage that?