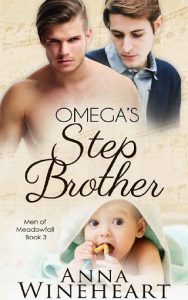 Beaten and lied to by his previous alpha, Wyatt Fleming has been recovering from his past: by running his own restaurant, and being the best dad to his daughter, Hazel. No one knows his deepest secret: Nine years ago, he kissed his alpha stepbrother in the family’s piano room.
Raph has never forgotten that kiss. Not when Wyatt had looked at him, wide-eyed and beautiful. Nine years ago, their grandmother caught him kissing Wyatt. Wyatt had fled, entangled himself in an abusive relationship. By not rescuing him, Raph had helped ruin his brother’s life.

Saddled with guilt, Raph wishes he had fewer regrets: he should’ve stood up to Grandma, should’ve gotten himself out of debt, and stayed with the one omega he could never let go.
When their father throws a party, Raph finds Wyatt in heat. Their simmering embers kindle into a roaring flame; after a steamy night together, Wyatt discovers that he’s pregnant. Raph refuses to fail his omega again. Wyatt refuses to abandon his innocent child. As their relationship intensifies, both men face the very real danger… of their family and pasts coming to pull them apart.