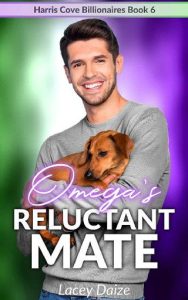 Corey’s been content to wait for his fated mate, but gets a shock when the other man runs at first sight.
Corey has a good life. He loves his job as a dog walker, and takes his dedication further by volunteering at the local shelter. The only thing missing is a mate. But that’s ok. He’s known for a while that fate has a man chosen for him, so he’ll wait. In the meantime he’s got his best friends and plenty of dogs who’ll accept all the love he has to give.
Nate knows there are expectations for fated mates—expectations that he’ll never be able to meet.
Nate knew as far back as high school that there was something different about him—he didn’t lust after omegas like the other alphas did. But it wasn’t until college that he learned the word that described him: demisexual. For a while he was fine with it. It just meant that dating and relationships would mean a different process. Then he started feeling that he had a fated mate, who would expect to be bedded and bonded that same day. It’s not something he can do, and he knows it’s in his mate’s best interest if he lets him go to find another man. But the pull of fate is strong, and, despite himself, he wants to get to know Corey better.
Can the two men give love the room it needs to grow first when fate itself is trying to push them together?