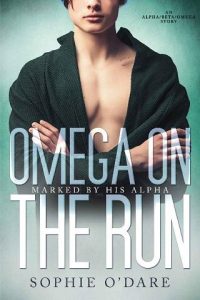 An Omega on the run. A new home. And the attention of the hottest Alpha at school? What has Ben gotten himself into?
The last thing Ben ever expected to do was run away from home. As a senior in high school, he’s never had a problem with his Omega status. But when his mom comes home with a new Alpha boyfriend, everything changes. The new man in the house sets off red flags. Ben’s mom, however, refuses to listen before she leaves on a business trip, abandoning Ben to the care of a man he doesn’t trust.
Desperate, Ben contacts the Omega Outreach Program, where he’s set up with a safe space among other Omegas. The surprises keep rolling in when Ben returns to school only to discover he now has the attention of Flinn Murphy, a popular Alpha senior who has never spoken to Ben before. As a volunteer for the Outreach Program, though, Flinn’s attention is now focused on Ben, and as the two men grow closer, Ben finds himself falling hard and fast.
But they’re only friends because of the program, aren’t they? With graduation and Ben’s eighteenth birthday looming, will that mean the end of Flinn’s interest? Or, has this Omega on the run caught Flinn’s attention for good?