Home
Fantasy
Of Wish and Fury by S. Young (ePUB) 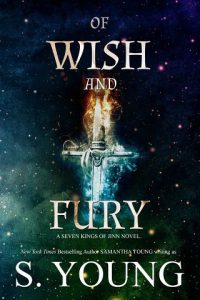 Previously published in 2012 under the title Scorched Skies (A Fire Spirits Novel).

The White King has crossed the line, sounded the horn, sent out the wolves.
When blood is shed and life is lost, Ari finally realizes her identity as both hunter and prey. It seems her father will stop at nothing to force her will to his own and distracted by Charlie’s latest mistake and her seemingly misguided attraction to Jai, Ari never thought to fear anyone else but the jinn king.
Blindsided and attacked, Ari learns a new wolf has joined the hunt. A dark sorcerer believes he knows a way to bleed the power of the seal and wield it as his own, and he is even less patient to do so than the White King.
Let down by Charlie, rejected and confused by Jai’s mixed signals, uncertain if she can trust the Red King, Ari will not allow her loneliness to become her weakness. The war for the seal has only just begun and Ari is no one’s victim. She will no longer be the hunted.
It’s time for Ari to become the hunter.