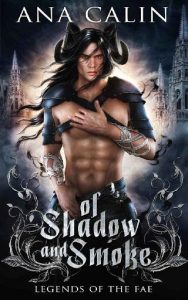 The affair between fae prince Salazar Shadowthorn and me, a human witch, is three things – toxic, destructive, and forbidden. Now, it might become deadly.
Salazar is a prince without a crown, a tragically beautiful force of night. Shadow and smoke are deadly weapons in his hands, and even demons have learned to fear him. Yet now a mysterious power is closing in on him and his people, and Salazar can’t beat it alone. He needs to awaken the shadow fae king. Only that awakening the king is no less problematic than the dark power seeking to gain control of his kind. Because of me.
There’s a big fat chance that I’m the king’s fated mate, which means that Salazar and I would have to stop this toxic thing we’re doing. He likes toying with me, making me beg for him in basements, and pleasuring me in public in order to humiliate me. Perverted delights, to which I’ve secretly become addicted. We’ll have to kill this sick chemistry between us, if we want to stand a chance against this new power. A rising menace that can lead us both, ruthlessly, to our deaths. Unless…