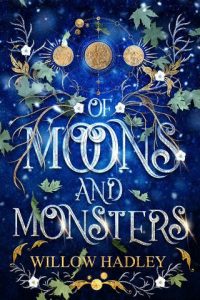 Isla learns that lesson all too well when she agrees to go to a party with her half-demon best friend, Alistair, to help him make his vampire ex-boyfriend jealous. Their plan backfires when Alistair’s ex turns out to be more psycho than Isla realized, and she finds herself being kidnapped and sold on the supernatural black market.

While Isla’s only human, she’s spent her life surrounded by supernatural creatures. Her situation is precarious, but she’s pretty sure she knows what to expect. At least, until her buyer ends up transporting her to a completely different realm called Briya where nobody speaks her language.

Isla is gifted to the four Guardians of Briya—Reule, Audun, Maalik, and Caelan. With the dreaded Beast’s Moon looming right around the corner, the Guardians are expected to choose a mate. They’re furious with their king for his scheming, and they’re determined to help Isla find her way back home to Alistair. But the timing of Isla’s arrival complicates everything, and they find themselves drawn to her no matter how hard they try to fight their instincts.